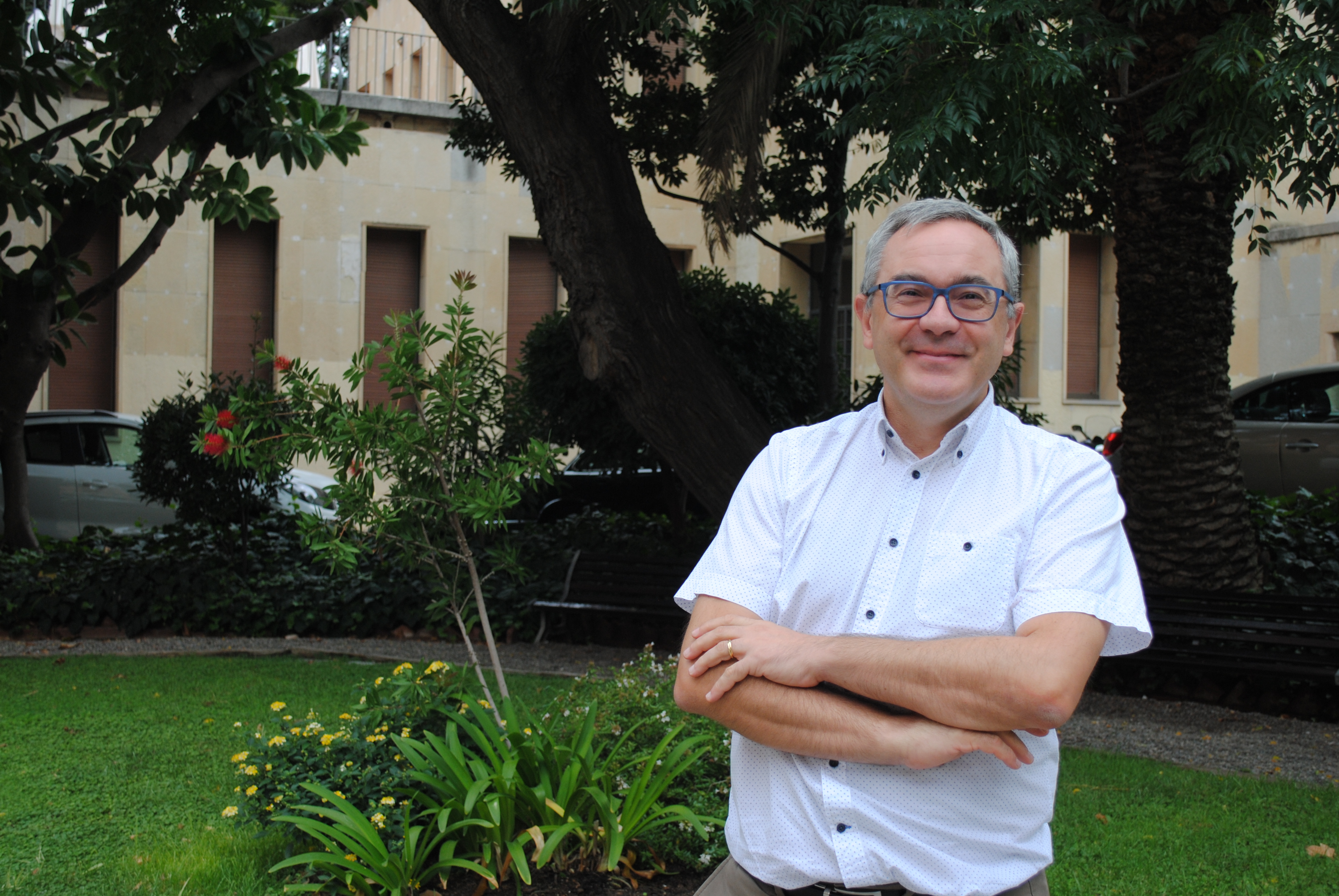 Santiago Vázquez: «It is necessary to find a specific treatment for acute pancreatitis»

Dr. Santiago Vázquez and his team have synthesized a compound capable of avoiding the degradation of an anti-inflammatory naturally produced by the organism that could be very important for the treatment of acute pancreatitis. The project was among those selected by the FBG to receive support from the Fund for the Promotion of Innovation (F2I) programme: “F2I helped us to select a second candidate when we knew what the industry was looking for,” comments this researcher from the Faculty of Pharmacy and Food Sciences of the UB.

How has the F2I Valorisation Fund helped you?

Thanks to the CaixaImpulse programme we were able to synthesize, select, and evaluate in vivo a compound that has proven successful in treating acute pancreatitis in animal models. When we presented this project to different pharmaceutical companies and investors, their response was that they liked everything —the target, the approach, and the results— but that they wanted a compound that could be administered at a much lower dose to avoid side effects. When we knew what the industry wanted, the Valorisation Fund made it possible to repeat the study with a more active family of compounds. We invested the F2I money in selecting a second candidate through a series of in vitro and in vivo studies. Now we have a compound that acts 100 times more potently on the enzyme and also has a much longer half-life in blood than the one we had before. Therefore, with more potency and more half-life in blood, we hope to achieve the same positive effects that we have already seen, but by administering a much lower dose. This is the goal, and the idea is to knock on the doors of the pharmaceutical companies and investor groups with which we talked in the first place and show them what we have now thanks to the F2I funding. Depending on how these contacts progress, we will consider whether to create a spin-off or to grant a licence.

What is the current status of the project?

A whole series of new compounds were synthesized, a series of in vitro tests were conducted to select a candidate, and finally, an in vivo study was carried out on mice to verify that the compound actually reaches the blood and is not metabolized quickly. Now the only thing we need to do is to complete the efficacy trial in an animal model of acute pancreatitis. We are very optimistic, as the previous trial yielded very good results with a worse compound.

To which diseases could this be applied?

Acute pancreatitis is a serious illness that currently has no specific treatment. Normally the person who goes to the medical centre does so urgently, and they are basically treated with hydration and analgesics (it is very painful), and antibiotics if there is any associated infection. In general it is a process from which a healthy person recovers in a few days, but sometimes it leads to many complications, especially respiratory problems, and there is a significant percentage of pancreatitis patients who end up in the intensive care unit. Another important aspect is that many pancreatitis patients usually experience other episodes of the disease within a few months. Therefore, it would be important to have a specific treatment, especially to reduce the inflammatory component of pancreatitis. We have spoken with different medical teams from various hospitals in Barcelona, who have told us that it is really a necessity because there is nothing specific for these cases.

How does the compound work?

The compound is an inhibitor of an enzyme that degrades a substance naturally produced by the organism with powerful anti-inflammatory properties. If we inhibit this enzyme with the drug, what we will do is increase the levels of this natural anti-inflammatory, which also has other beneficial properties: it reduces the stress of the endoplasmic reticulum, decreases cell death and also has vasodilator activity, all of which are positive for the treatment of the disease.

Inflammatory processes are involved in a multitude of diseases, which is why in the last two years we have been studying other diseases to which this compound could be applied. Specifically, we are evaluating its potential to reduce neuroinflammation, which is present in many neurodegenerative diseases.

An interesting aspect of the project is that we are combining the experience of various groups at the University of Barcelona, which will allow us to obtain very promising results.

This is one of the things I learned many years ago from my thesis supervisor, Professor Pelayo Camps, one of the researchers who have signed contracts with companies through the Foundation for over thirty years. I immediately learned that at university, if you wanted to have a research group a little larger than normal, or if you wanted to do riskier things, it was important to complement public funding with private funding. I have been permanently collaborating with companies, both chemical and pharmaceutical, large and small, for more than twelve years, and it is a very rewarding experience, because you do things that you would not do in a strictly academic environment, and it is also profitable. It requires effort, but the compensation it provides is really remarkable, not only for me but also for the staff in training, who in this way are able to see different aspects from those involved in their doctorate.

I don’t remember ever hearing that “the university isn’t there to work for companies.” Several of the older professors in the Department have told me similar things, but I have never heard it among researchers of my generation. And this has also been passed on to the students. Today many students arrive with a certain entrepreneurial vocation that I didn’t see before, at least among my doctorate colleagues. Now they are more dynamic in this sense.

I have great admiration for the older generation of scientists who advanced Spanish science despite major problems at a time when we were disconnected from Europe. A generation that often did not even speak English and yet with their dedication made it possible for us who did our doctorate in the 90’s to go abroad and compete in prestigious centres unashamedly.

It is very difficult for me to choose one, there are so many and in such different fields… And not only inventions or discoveries, but there are also changes in the paradigms of people who have been just as influential as inventions, or even more. For example, the establishment of hygiene rules, the implementation of which revolutionized the fight against infections.

…an essential tool for connecting basic science to applied science and for science to reach society. I believe that without the FBG it would be very difficult for academic research to be transferred to a company.