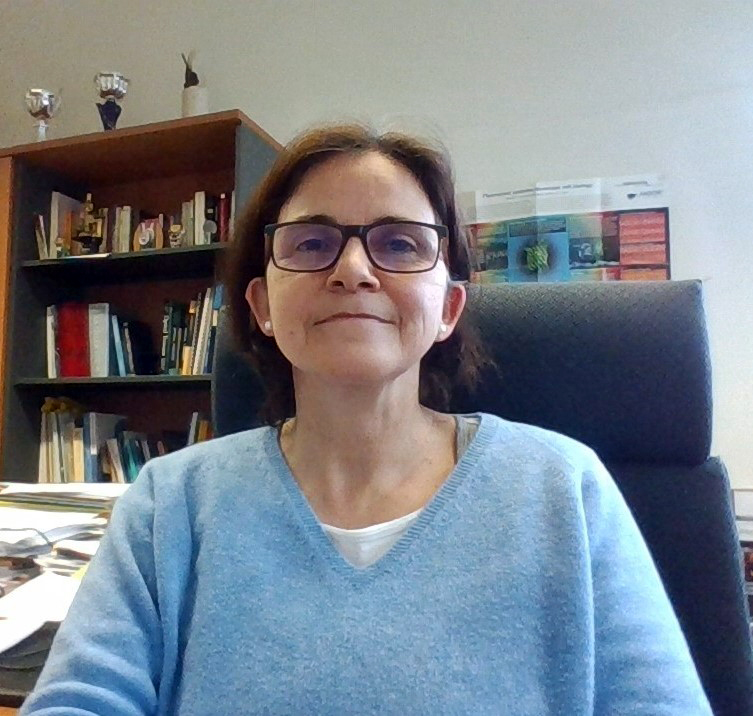 Estela Martín Badosa «The world of transfer is quite satisfying, once you get into it»

Estela Martín Badosa is a member of the ‘Optical Trapping Lab – Grup de Biofotònica’ (BiOPT) research group in the UB Faculty of Physics. Their project to develop holographic laser projection technology has received a €25,000 Valorisation Fund grant (FVal) through the Fund for the Promotion of Innovation (F2I) programme.

What is the project about?

What we want to do is create an extremely high-quality system for projecting images with colour laser light that has fewer limitations in terms of the amount of light it can project. If we can get brighter images, we can make them bigger. Our technology is completely different from the commercial systems currently available. We don’t put an image there and then project it. We create it as a hologram that reconstructs the image we want on the observation screen. To do so, we use an acousto-optic device in which the propagation of sound waves from a crystal changes the light that passes through it in a very precise way. This technology can handle much more powerful density levels than other commercial projectors, and we think this is the main advantage of our system.

The one problem with laser projection, though, is that it facilitates the phenomenon of interferences due to the high coherence of this type of light. If two points next to each other in the image interact, it causes noise, which means brighter and darker speckles that are very unpleasant. Commercial laser projectors use a rotary diffuser to reduce this effect. In our case, however, this effect is limited naturally using sound waves. And that is an advantage, above all when you want to project an image directly onto a surface, to make a mask or for printing, for example. Meaning, a projection without a diffusion screen that could cause speckling.

What type of projects would it be used for?

We’ve focused on projectors, because it is a very large market. We’re really competing in a field with lots of money behind it, and we think we can offer an alternative technological solution. But laser projection is used in many arenas, including laser etching (on clothes, for example). I think we can also compete in this sector because our system allows for more complex images, with excellent quality and quick turnaround.

Where is the project at now?

Right now, we have a prototype that does small, black-and-white images. Over the coming year, we want to set up the colour system and add a very fast shutter to prevent any overlapping of consecutive signals, which means we can increase the device’s refresh speed. These two improvements seem small but, technologically, they are quite difficult. The natural process would be to apply for a Seed grant or a Product grant from the Government of Catalonia, which we’ve had in the past for other projects, and move towards a commercially viable project or towards licensing a patent.

How will you use the F2I funds?

We’re investing the F2I money mainly in hiring Dorian Treptow, a specialist with the expertise to help advance this technology. I’ll take advantage of this opportunity to say that, in many cases, it’s difficult to get funding to pay the people who have to do this work. We’ll also spend a small part on purchasing materials, as we have quite a few projects related to the same idea but with other applications, such as microscopy.

I think it is essential that the public funds invested in us, in spaces, equipment, research projects, salaries, etc., are returned to society in some way. Now, during the pandemic, we’re seeing how important that is. Basic science is necessary to generate new knowledge, and I also believe that research should reach society as something useful. I think we talk a lot about transfer in Spain, but we don’t do enough yet and we’re late to the party. When I started out, I wasn’t interested in transfer. But once you get into it, it’s quite exciting and satisfying.

I’m also critical of the lack of recognition for the research personnel working in transfer. This job is undervalued compared to a more conventional academic career.

In my field, I would say the laser is the invention of the 20th century, because it has revolutionised many fields of science and technology. Historically, I would say the wheel, because you can do a lot with a pair of wheels today.

What would you like to see in the future

I would like for us to take better care of the planet, to consume less and be more aware that resources are limited.A future advancement or invention that scares you

Two things scare me: genetic engineering allowing us to design humans a la carte, and artificial intelligence getting out of hand and taking over. I worry that we won’t use these advances, which are extremely important and can help loads of people, ethically.

Agustin-Jean Fresnel. I’m surprised by his huge contribution to the field of optics, despite dying young, and the number of contributions with his name on them, such as the Fresnel coefficients, the Fresnel diffraction and the Fresnel lens, among many others.

The organisation that helps us researchers look at science from a different point of view. One story related to that, I remember meeting with someone from the FBG for this project. We were really excited about a close-up image of an eye that we had created with a laser and an acousto-optic deflector. When the FBG saw the image they said it was horrible and looked all blurry. At that point, we were convinced we had an incredible breakthrough on our hands. Now, though, I see that image we showed them and can’t help laughing. It’s horrible. And that’s what I mean with the other viewpoint. For us, at that time, it was a success from a scientific standpoint, but in terms of utility, it wasn’t at all. The FBG is the one who tells you: “That’s great, but now make it work.” And now, a few years later, we have truly exceptional images.