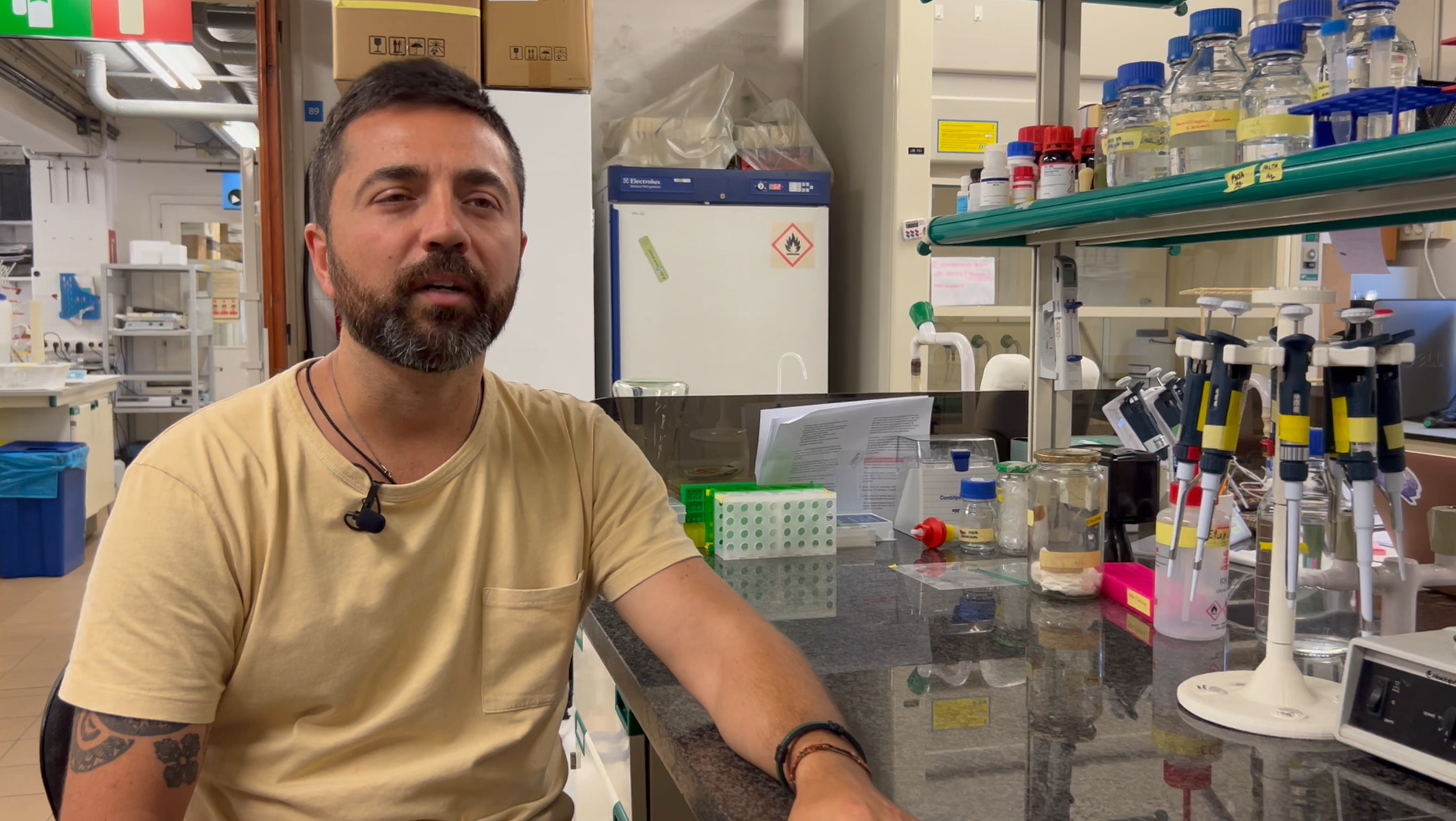 Christian Griñán: “Factors such as stress make it easier to suffer from pathological ageing”

Environmental factors, parental lifestyle, and even parental trauma can affect subsequent generations. Epigenetics studies these small alterations in DNA. It is a relatively new science that in recent years has also focused on the field of neuroscience to study brain-based diseases. Christian Griñán is a researcher at the Faculty of Pharmacy and is using worms that are barely over a millimetre long to search for new targets to prevent and cure neurodegenerative diseases such as Alzheimer’s or Parkinson’s.

In the 1940s, Conrad Waddington, an expert in embryology and evolution, first described epigenetics as those marks found within the DNA that can be inherited, but which do not change the DNA sequence. Thus, it partly explains embryonic development and the generation of different cell types. There are basically three molecular epigenetic mechanisms: DNA markers, histone tails, and microRNAs.

So it comes down to the passing on of environmental conditions, of the lifestyle of one’ s parents?

Inside cells there is a mechanism capable of modulating genes. This mechanism is epigenetics. It is also a set of marks found in the DNA. These marks can be modulated as a consequence of the environment and can be inherited. I am interested in how environment and lifestyle can affect the organism and lead to neurodegenerative or ageing-related diseases over several generations. Genetic inheritance accounts for only 7% of all inheritance, which means that we receive a large part of our inheritance from external stimuli.

What are the consequences of these small changes in the DNA?

These epigenetic modifications allow us to have an adaptive range of responses to external and internal stimuli. In terms of neuroscience, the brain is an organ that undertakes a very large amount of activity and takes up 21% of all our energy. It is constantly active and requires significant protein synthesis. How is this regulated? Well, through epigenetics. It is a molecular mechanism that, over a sufficiently short period of time, gives us the ability to regulate the different molecular pathways to adapt to our daily needs.

Is epigenetics important in brain-based diseases?

In the last 15-20 years, epigenetics has been studied extensively in the field of neuroscience leading to evidence of altered markers in patients suffering from neurodegenerative diseases. These are reversible and highly dynamic modifications, and it is difficult to know which ones are really important, which in turn complicates epigenetic therapy. However, some compounds are being explored and it is likely that in the next ten years we will have some therapy along these lines.

Does that mean that an epigenetic modification can lead to a neurodegenerative disease?

There is a branch of neuroscience that links neuropsychiatric disorders to the molecular processes that trigger neurodegenerative diseases. In the first and last stages of life, humans and all organisms are more susceptible to change. In the first stage, we are undergoing a process of development and the organism is very flexible in order to adapt to the environment. In the last stage, it is just the opposite: we are organisms with very fragile molecular systems and susceptible to external changes.

Is there a link between mental health and potential future neurodegenerative diseases?

Yes, for example, when we determine that a person has Parkinson’s disease, usually 70% of the neurons are already dead. The disease has therefore developed over a long period of time and we have not been able to see it. The same happens with Alzheimer’s, it develops over 20 or 30 years. It is clear that elements such as stress or emotional and psychological activity —in other words, mental health issues— trigger or facilitate pathological ageing.

Could an epigenetic study be carried out to predict future neurodegenerative diseases?

Work is still ongoing. The problem is that these DNA modifications are reversible. Diseases are molecular processes and what may initially be the cause, later becomes a consequence.

You use worms instead of mice to study epigenetics.

This is a very interesting model that emerged in the 1960s-70s. We use a one-millimetre-long earthworm called C. elegans. It has 959 cells, it is transparent, feeds on bacteria, and has certain characteristics that make it particularly useful for neuroscience because we know its number of neurons (302) and many of its neuronal types are the same as those found in humans. In addition, its connectome, that is, the connection map of all its neurons, is well known, as are its genes, more than 40% of which are the same as human genes.

And you focus on generational changes.

These worms are also of great interest because it is possible to genetically modify them and they develop a very immediate behavioural change. They also have a very short lifespan, so every five days another generation reaches adulthood, which allows us to carry out trans-generational inheritance studies. In this way, in a very short period of time, we can observe how a positive or negative stimulus received by the parents is transmitted from generation to generation. Thus, we can study the molecular mechanisms involved in inheritance.

Then you study them through an associative learning methodology?

We put twenty fertile adult worms on a petri dish. In the centre we put both Escherichia coli, which is the bacteria they feed on, and Antimycin, an insecticide that is toxic to them. When worms are born, they feed on this toxic Escherichia coli and they make behavioural decisions. They’re forced to stay away and stop feeding, but some of them are able to stay and eat this Escherichia coli. So we can look for behavioural changes that correlate with molecular changes in each group.

We are now studying whether these behavioural changes can be absorbed by the genome if we maintain that negative stimulus across several generations of worms. In this way, we will be able to extrapolate behavioural drifts in humans.

Democracy, in 506 BC, to suppress autocratic regimes.

I would like to see people become empowered, to stop looking for causes in others, and look inwards instead. I think science, and researchers in particular, can contribute a lot in this regard.

My departmental colleague and thesis supervisor, Dr. Mercedes Pallàs. And also the neuroscientist Christof Koch because he connects neuroscience and Buddhism.

An opportunity. When I did my PhD, I was able to do research thanks to a contract managed by the Bosch i Gimpera Foundation. The FBG is very helpful, it allows you to keep on growing.