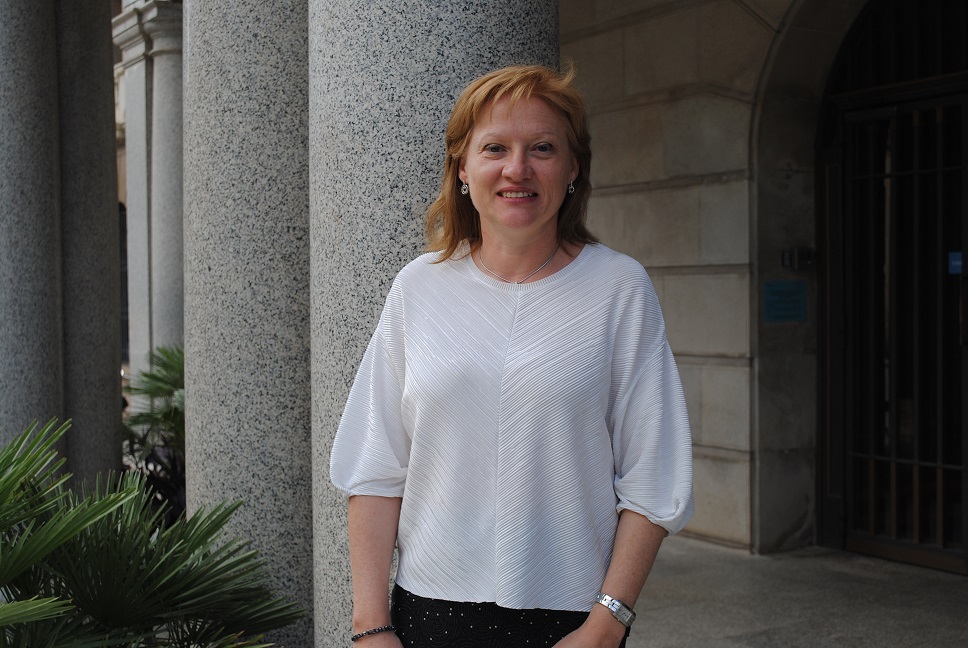 How do these new compounds work?

A member of our research group, Professor García Sevilla, determined that the levels of imidazolic I2 receptors increased in the brains of patients who had died of Alzheimer’s disease. We therefore realized that these receptors played an important role in the disease. When we found this new family of compounds, whose chemical structure is quite different from that of previously available drugs, we decided to contact different research groups and test the compounds in combination with these receptors.

We have conducted in vitro tests on human brains that have shown that these compounds display high affinity and selectivity for these receptors. We have also carried out in vivo tests on animals with cognitive deficits, and they have improved greatly when treated with these compounds, which do not show short-term toxicity.

We are going through the necessary phases to bring our family of compounds into the preclinical phase. Were the project to continue, the ultimate goal would be to have a candidate compound to treat people with neurodegenerative diseases, such as Alzheimer’s, Parkinson’s, and certain depressions.

What improvements does this drug offer?

According to our tests, this drug results in considerable improvements of cognitive deficit in an animal model suitable for neurodegenerative diseases and also in another Alzheimer’s animal model. In addition, the biochemical parameters associated with these diseases have significantly improved. This is all we can say for the moment. Can it have preventive effects, can it act in the early stages? We don’t know, because all the tests were performed on animals that were already sick. A mouse suffering from Alzheimer’s disease shows no interest when you put a new object in its cage. A mouse that doesn’t have the disease is always curious, and quickly approaches the object, smells it, and circles around it. Mice that were not initially interested, when given the compound, improved their movements and attention span, and became interested in new objects, and that is obviously important.

The ideal course of action in Alzheimer’s disease would be to act in its early stages, not when the disease is already developed, but this is what we have so far. There are models with which we can study prevention, and if we get enough funding, we will do so.

What’s the status of the technology at the moment?

We researchers have two problems: first we have to find something that is scientifically or socially relevant. In this case we have found something that promises to have a high impact on society. We have the whole theory all figured out about what would be an interesting discovery, but now we have to find the right funding to make it happen, and that’s the hardest part. The idea is for a company to take an interest at some point in the initial phase when the patent is still being evaluated, and to license it, or to get some entity to support this technique and invest in the project.

Among the authors of the patent is Professor Luís Callado, from the University of the Basque Country, who has carried out the entire study of the binding to the receptor in the human brain. Professor García Sevilla, from the University of the Balearic Islands, is also involved. He was the one to point out the increase of the levels of these receptors in Alzheimer’s patients and is one of the most recognized authorities worldwide in this type of receptor. Dr. Pallàs, from the Faculty of Pharmacy and Food Sciences, is responsible for the study of the receptors’ behaviour in animal models. Within the current research team, several contributions need to be highlighted. Dr. Julia García-Fuster, from the University of the Balearic Islands, is responsible for hypothermia studies in animals; Dr. Belén Pérez studies the crossing of the blood-brain barrier and pharmacokinetics; and Dr. Francesc Sureda, from the Rovira i Virgili University, is in charge of studying the mechanism involved in the action of the compounds. Also noteworthy is the collaboration with the University of Santiago de Compostela, where metabolic markers and toxicity are studied. We also collaborate with Professor Li, from Buffalo, in the United States, who is currently studying analgesia. This is generating a lot of scientific interest, and there are also two companies interested in the transfer of the patent.

How important is the relation between universities and companies?

What researchers do must be commercialised in order to improve society, and companies are precisely the ones to do this. They are the intermediate step between the University and society. When you are working on something and you want it to reach society directly, you have to know what companies want and what they are interested in in order to make that happen. In this sense, companies are fundamental. If we don’t involve companies, we’ll never make it to market, that is, unless some researcher creates a spin-off, which, after all, is also a company.

What do you expect from your participation in Science + Partners?

What I expect from Science+Partners is basically for companies to give us their opinion on the project and on the immediate steps we need to take to increase its appeal so that it can be transferred. Drug development is very complex, each application is different from the next one. A drug with activity on the central nervous system that has to cross the blood-brain barrier is not the same as a drug that acts at the cardiovascular level, for example. There are no guidelines to tell you what you need, but companies can say what is required to make the project more attractive or closer to being licensed.

The best discovery in history

All inventions are relevant. Today, any discovery of a new receptor or marker, even if it doesn’t seem to have great relevance, can lead to the development of new technology around it and eventually become important.

The people who have contributed to my training since I finished my studies have been my role models, but as current examples I would like to add all university professors who are willing to work, even if they have little funding. In other words, we ourselves are scientfic role models who live and work on a daily basis and train new researchers as best we can.

I would like to see a lot of money invested in the fight against cancer. We have the example of AIDS, which became a chronic disease because a lot of money was invested in studying it. I believe that important long-term investment policies need to be pursued and that it is essential to understand that projects need considerable funding and that they will produce results in several years’ time.

… the agency that helps us transfer our research to society. It is a team of professionals who struggle—like us, not always with all the necessary means—to transfer projects to companies. We also work with companies to obtain additional funding, and the management of these contracts requires researchers to invest too much of their time.