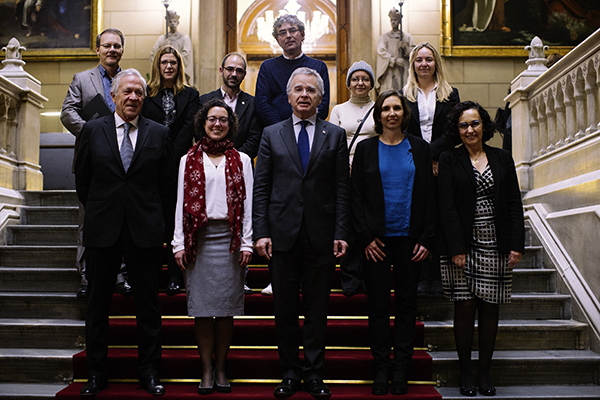 On Tuesday December 11, the Aula Magna of the Historical Building held the award ceremony for the Awards of the Board of Trustees of the UB and the Bosch i Gimpera Foundation (FBG). During the ceremony, presided by the Rector of the University of Barcelona, Joan Elias, Miquel Paraira, Water Quality director in Aigües de Barcelona, gave a conference on the occasion of the thirty years of continuous collaboration between the University and Aigües de Barcelona, through the Bosch i Gimpera Foundation, on research and knowledge transfer projects.

The rector of the UB, the acting president of the Board of Trustees, Joan Corominas, and the director of the Bosch i Gimpera Foundation, Carme Verdaguer, gave the awards to this year’s awardees. The Antoni Caparrós to the best project on knowledge transfer was given to an app carried out by the Laboratory of Phonetics of the UB, led by Ana M. Fernández Planas, in collaboration with the company Team Training (Madrid), promoted by Soraya del Portillo. The app, named Chiara, allows users to follow a practical course on oral skills and techniques without the participation of any lecturer, so that any person with a smartphone and virtual reality glasses can improve his/her public speaking skills. Chiara analyses presentations the user gives during the course and automatically assesses whether this person is a good orator. In addition, it provides the user with the necessary information to improve his/her oral skills in public.

Also, the Antoni Caparrós Prize was given to a collaboration in the field of solar thermal power plants, which create energy from concentred solar radiation which becomes vapour or hot air. In particular, the joint study by the UB Research Group DIOPMA and the company Abengoa has been essential to build the first commercial power plant with parabolic cylinder technology and salt storage. Within the frame of this project, DIOPMA developed a series of methodologies that enabled the selection of materials and validation of storage containers that make it easier for the plant, built in Arkansas (United States) in 2012, to supply electricity in a stable way even when there is no sun.

Impetux Optics, a spin-off by the University of Barcelona, has been awarded the Senén Vilaró Prize to the best innovating company. This is one of the few companies in the world working on the creation of optical tweezers, a technology lying in the intersection between biology, nanoscience and photonics, which gave the Nobel Prize in Physics in 2018 to Arthur Ashkin. This innovation, carried out over the years in the Group of Biophotonics of the Faculty of Physics of the UB, uses light to enter complex environments such as the inside of a cell without damaging it. Also, it enables the manipulation of microscopy objects to get key information –which was inaccessible so far- on the interactions that take place between them.

During his speech, Miquel Paraira highlighted that the agreement that was set thirty years ago for the systematic control of the main groups of viruses in the water, does not only cover that “but it also covers research aspects, in order to incorporate the recent scientific advances in this matter”. In this sense, he said that thanks to this control –which only a few companies in the world conduct systematically- they can state that “tap water in Barcelona is the most controlled food product in the world, a product with the highest safety guarantee and which is controlled not only internally but also through collaboration agreements with important international distinguished research centers”.