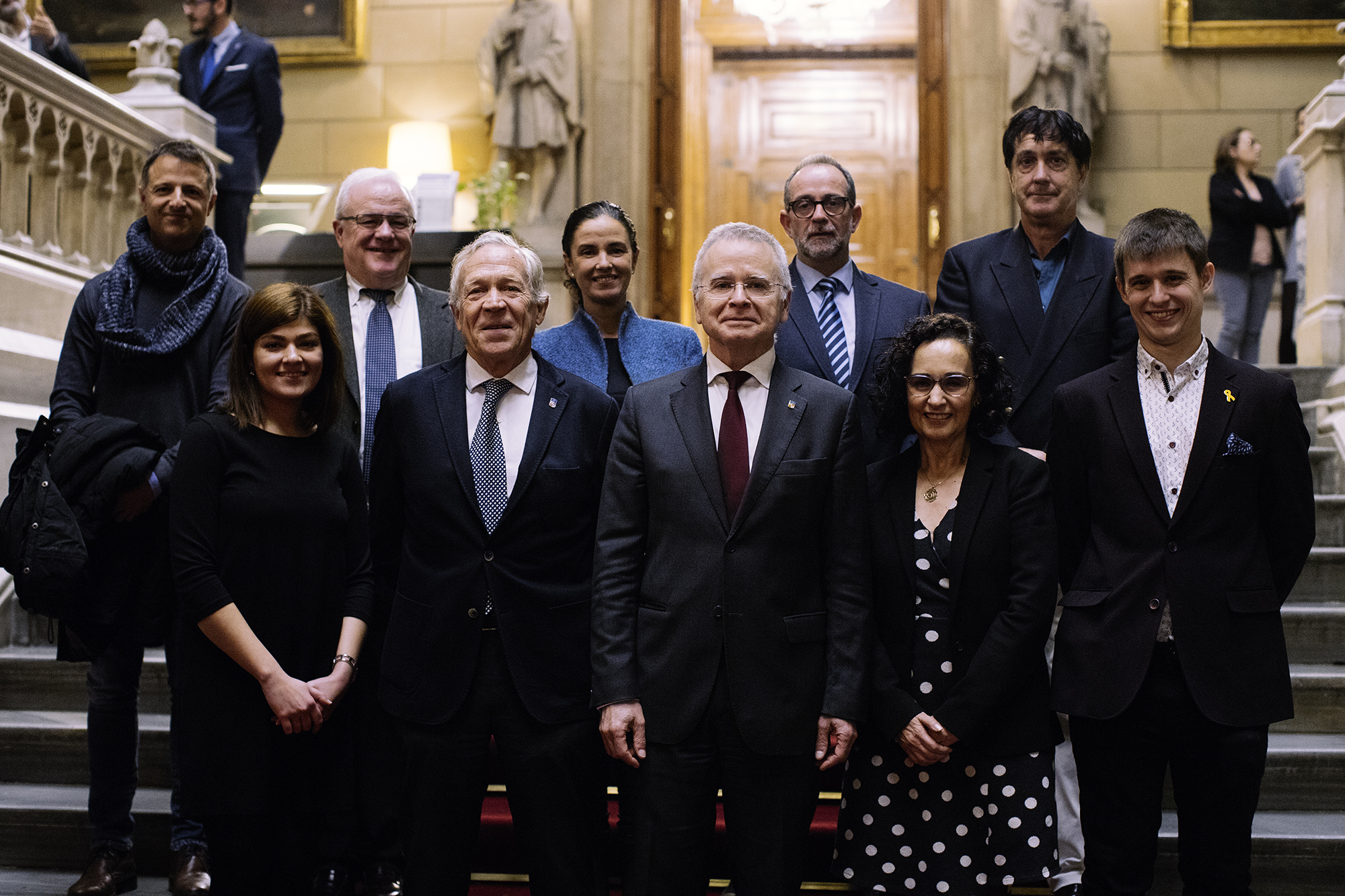 On Wednesday, December 11, the Aula Magna of the Historical Building held the ceremony for the Board of Trustees and Bosch i Gimpera Awards. The ceremony, presided by the rector of the University of Barcelona, Joan Elias, included the talk by José Miguel Vela, director of Drug Discovery & Pre-clinical Development in Esteve, who received the UB award on collaboration in research projects, development and innovation. The rector of the UB, the president of the Board of Trustees, Joan Corominas, and the director of Bosch i Gimpera Foundation, Carme Verdaguer, gave the awards to this year’s awardees.

Antoni Caparrós Prize to the top project on knowledge transfer was given to RisCanvi, designed to prevent violent crimes and violence in prison. This is a technology developed by the Group of Advanced Studies on Violence (GEAV) of the UB, led by Professor Antonio Andrés Pueyo, who has worked for prison centers of the Catalan Government since 2009. The program is the first prison management tool to have been carried out and applied in the professional field in Spain and which aims to prevent and manage the risk of violent behaviour in prisons. Since the program was set, in 2009, there have been more than 30,000 evaluations and RisCanvi became one of the cores of preventive management and rehabilitation and penitential policies in the Catalan Government, improving processes such as giving permits or restrictive and rehabilitator actions (probation, etc.).

The Antoni Caparrós Prize was awarded to the twenty-five years of collaboration between the company Talleres Mecánicos Comas (TMComas) and the University of Barcelona, in particular with the Thermal Projection Center (CPT). This university-company bond enabled this studio from the sector of precision mechanics to become a relevant actor in the field of new materials and surface engineering at a national, state and European scale. The collaboration was materialized in more than twenty different projects, which enabled the company to diversify their offering of services and products in the field of surface engineering and take the way to the production of new materials and products.

Nostrum Biodiscovery (NBD) was awarded the Senén Vilaró Prize to the top innovative company thanks to its innovative technology to speed up the design of new drugs. This is a spin-off from the University of Barcelona, created in 2016. To help pharmaceutical and biotechnological companies in the process of discovery and development of drugs and enzyme engineering. The company’s competitive benefit is based on computational technologies -carried out by Modesto Orozco, professor at the Department of Biochemistry and Molecular Biomedicine of the UB and group leader in the Institute for Research in Biomedicine (IRB Barcelona) and Víctor Guallar, researcher from the Barcelona Supercomputing Center, together with their teams in IRB Barcelona and BSC, and the support from Bosch i Gimpera Foundation of the UB, the Catalan Institution for Research and Advanced Studies (ICREA) and Marcelino Botín Foundation. Both are founding partners of Nostrum Biodiscovery together with Robert Soliva.