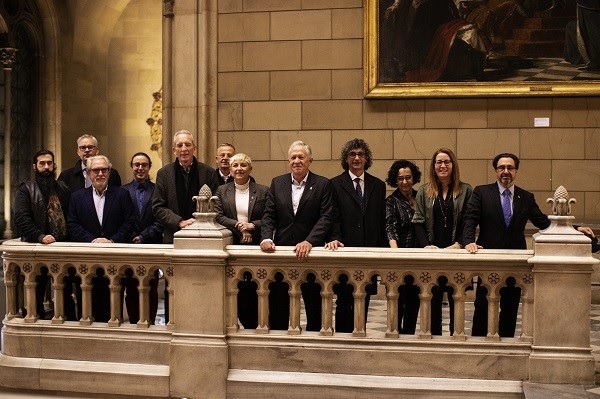 On Wedndesday, December 1, the Aula Magna of the Historical Building hosted the award ceremony for the Board of Trustees and Bosch i Gimpera Awards. The rector of the UB, Joan Guàrdia, the president of the Board of Trustees, Joan Corominas, and the director of the Bosch i Gimpera Foundation, Carme Verdaguer, gave the prizes to this year’s awardees.

The Antoni Caparrós Prize to the top project of knowledge transfer was given to “La geoquímica isotòpica: una nova tecnologia per a la millora de la gestió del medi ambient”. It consists on using the analysis of different natural isotopes present in water pollutants, such as nitrates or sulphates, to determine the origin of such pollutants and therefore improve the environmental management. This technology with isotopes can be sued to quantify the efficiency of used decontamination treatments, since the degradation processes are associated with a change in the isotopic composition. This is a Project by the research Project with TECNIO MAiMA accreditation, led by UB Professor Albert Soler i Gil. The technology has been transferred to companies and bodies of the public administration, such as the Catalan Water Agency (ACA), the Catalan Waste Agency (ARC), the Spanish Ministry of Ecological Transition and Demographical Challenges, through the public company TRAGSA, and Chile’s General Water Department (DGA).

Another awardee of the Antoni Caparrós Prize was the collaborative project “Cocreació de projectes educatius de museus”, presented by Núria Serrat, Serra Hunter tenure-track 2 lecturer of the Faculty of Education of the UB. This initiative, developed together with the company ADhoc Cultura, has enabled the design of a collaborative process to create educational plans in the museums of Catalonia, such as the Olot Museums, the Museum of Empordà, the Museum of l’Hospitalet, the Archaeology Museum of Catalonia, the Catalonia Railway Museum and the Arts Museum of Girona. The aim of the project was to make the museums’ educational plans more adapted to the features and needs of the final addressees. The result is a standardized methodology for creating co-creative processes in the cultural and educational fields, the people-oriented culture.

Qilimanjaro Quantum Tech received the Senén Vilaró Prize to the top innovative business. This is a spin-off of the University of Barcelona, the Barcelona Supercomputing Centre (BSC) and the Institute of High Energy Physics (IFAE). With three former UB students and the professor of the Faculty of Physics José Ignacio Latorre among its founders, Qilimanjaro works on a disruptive platform of quantum computing, the new paradigm that will revolutionize the computer sector during the next sector. This type of computing uses the phenomena of quantum physics to exponentially increase the power of calculus and tackle problems in areas such as the development of new drugs, the assessment of financial risks and logistic pathways, which are now intractable for the most advanced supercomputers. Qilimanjaro has signed two important contracts with customers from France and the United Arab Emirates for a value of more than three million euros and it also takes part in the European project Horizon 2020 AVaQus, recently given by the European Commission and led by one of the co-founders of Qilimanjaro, Pol Forn Díaz (IFAE). Moreover, it offers consultancy services for companies interested in these technologies or those that need to adapt to quantum computing.