Partners are sought to further develop the technology through a co-development and license agreement.

Researchers from the University of Barcelona have developed a multi-purpose circuit aimed at summing signals received from a Silicon photomultiplier (SiPM) array. This sum is performed at high speed, high dynamic range and low noise, and the particular design of the circuit allows working at a lower voltage. The team is keen to collaborate with suitable partners for development of the technology. A pre-industrial prototype has been designed and built for several applications, such as radiation detectors, medical imaging or Cherenkov telescope arrays.

Nowadays, ultrasensitive photo-sensors like Silicon photomultipliers (SiPMs) are replacing photomultiplier tubes (PMT) in many applications due to their compactness and lower operating voltage required. As PMT have a larger active area as compared with SiPM, this replacement requires the substitution of one PMT with an array of several SiPM, especially in applications requiring large detection surface. Direct connection of each channel is problematic due to their lack of uniformity and the increasing number of channels to cover a similar area as a PMT. It is convenient to sum the signals of the multiple channels to simplify the complexity of the subsequent electronics. The present invention provides a summation circuit for photomultiplier arrays.

The integrated circuit offers three main features: (1) SiPM pixel summing in differential mode; (2) individual analog single ended (SE) channels; and (3) binary output encoding the amount of collected charge in the duration of the digital signal using a non-linear time over threshold (ToT) technique (one A/D is selectable per channel). Moreover, a trigger pulse is provided by performing an OR between all binary signals. Lastly, the ASIC includes a tuneable Pole Zero Cancellation (PZ) of the SiPM recovery time constants to adapt to sensors from different manufacturers. Decay times up to 100 ns are supported covering most of the available SiPM devices in the market. The PZ reduces the peak duration of the signal and the tail produced by the sensor, thus reducing spill-over (two events overlapped due to slow tails). 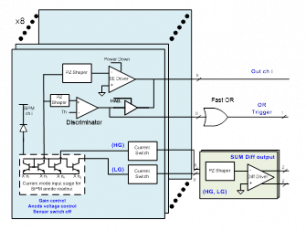 A pre-industrial prototype has been designed and built for scientific applications. Several prototype boards are being currently used by independent groups to be used, for instance, as a beam loss monitor or as ToF timing detector in the SHIP experiment at CERN.

A new prototype is being under development with further improvements such as lower power consumption, multiple summation combinations and summation output with linearized ToT. Linear ToT will allow direct interface with programmable logic, which is optimal for low cost and reconfigurable systems.