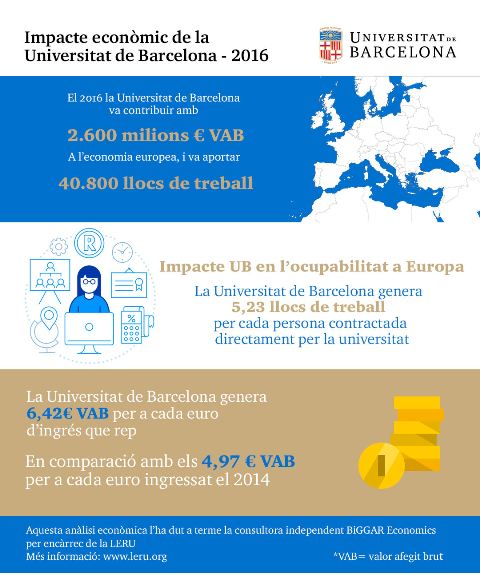 The UB generates a collective economic impact of € 6,42 in the European economy per every received euro

On Friday, December 1, the second report “Economic contribution of the LERU universities”, created with data from 2016, by the independent consultancy BiGGAR Economics at the request of the League of European Research Universities (LERU), which gathers 23 European research-intensive universities, among which is the University of Barcelona –was presented in Brussels.

According to the study, the presence of the UB in Spain, gathers figures of about € 2,300 million GVA, compared to the € 1,700 million stated in the report which was published in 2015 (out of the 2014 data). That is, the contribution of the UB in the Spanish economy, between 2014 and 2016, has increased by € 600 million GVA. Regarding employability, the impact in the Spanish economy went from 26,540 job vacancies in 2014, to 39,300, with an impact increase of 12,760 job vacancies. Also, regarding the thorough study of the UB in 2014, approximately three quarts of the UB impact are centered in the Catalan economy.

Regarding the contribution per each received euro, in 2016, the UB generated a collective impact of €6,42 GVA in Europe per each euro it received, and 5,23 jobs were created for each person who has directly hired by the University. Therefore, “the UB has increased €1,45 its economic impact, regarding GVA, compared to the 2014 report. This proves what was stated in other recent reports such as the report by ACUP, which highlight the positive impact and the transfer to society on the investment in the university, both regarding economics and employability”, says the rector of the UB, Joan Elias.