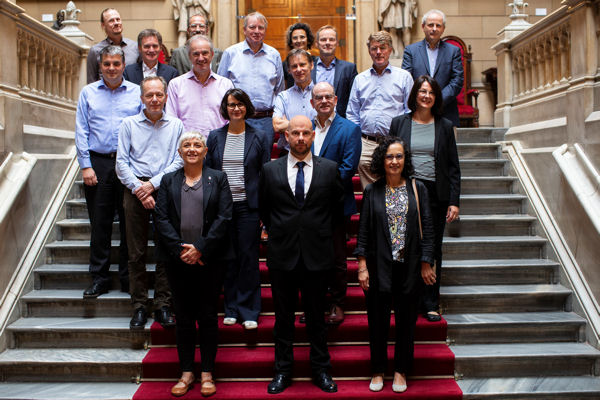 On October 5 and 6, the University of Barcelona hosted the regular meeting of the Enterprise and Innovation Policy Group of the League of European Research Universities (LERU), which brought together the heads of this area from thirteen universities in the network. The rector of the University of Barcelona, Joan Guàrdia, welcomed the attendees together with the vice-rector for Entrepreneurship, Innovation and Transfer, Mercè Segarra, and the director of the Bosch i Gimpera Foundation, Carme Verdaguer, both UB representatives in this LERU group.

At the meeting, Roman Arjona, chief economist of the European Union’s Directorate for Research and Innovation, gave a presentation on the need to update the EU’s industrial strategy based on strategic autonomy, i.e., reducing the EU’s dependence on third countries. The rest of the program consisted of exchanging best practices in the fields of innovation and entrepreneurship; working on the publications to be published,  and exchanging positions on the European Union’s innovation policies. In addition, the Barcelona Science Park held a round table with companies and institutions, in which Maria Terrades, director-general of the PCB, took part.

Recently, the Enterprise and Innovation Policy Group has made decisive contributions to the new European Innovation Agenda. Some of the ideas emerging from LERU address the five areas of improvement identified by the EU: access to finance for technology-intensive start-ups; support for scientific excellence as a source of invention; the power of universities as generators of innovation ecosystems; the strengthening of entrepreneurial education for students; and the creation of pathways for transferring scientific talent to businesses.