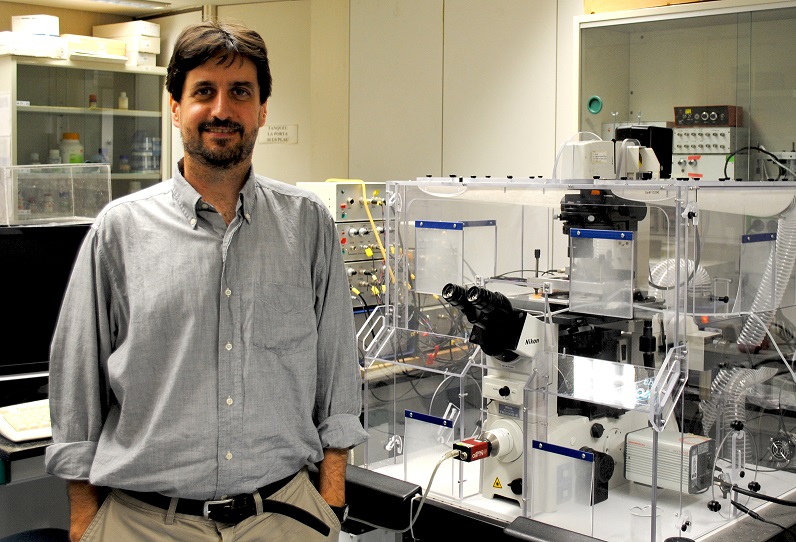 Jordi Alcaraz «I do not know if we will succeed in curing cancer, but we will manage to turn it into a chronic disease and keep it under control»

With only three researchers on staff, the Translational Research Group on Cancer and Pulmonary Fibrosis of the Faculty of Medicine and Health Sciences of the UB has just completed a second collaborative project with the pharmaceutical giant Boehringer-Ingelheim. This year, they have also seen their research recognized with a prize from the Spanish Association Against Cancer (AECC). “Every work we publish is a small miracle”,  says Jordi Alcaraz, the group leader.

Why is it so difficult to find a cure for cancer?

In fact, when we talk about cancer, we are actually referring to more than two hundred different diseases. Cancer can develop in different organs and in many different ways depending on the organ. In lungs, our area of study, there are at least three large groups and over half a dozen smaller ones that present different biologies and molecular alterations. This explains why it is so difficult to identify which among these alterations are critical and targetable. The other cause is that cancer is actually an organ that grows where and when it is not supposed to, an entity that fights for its survival, and stopping it implies stopping the development of a biological entity that we do not know that well.

What is particular about your group’s research?

What we are essentially doing is putting forward a new approach to lung cancer. So far, research has been very focused on everything that happens inside cancer cells, but we now know that these cells need help from the surrounding tissue in order to develop a tumour. The main part of this help comes from cells, such as fibroblasts, that accumulate in the tissue surrounding cancer cells. These neighbouring cells are recruited and modified by cancer cells so that they begin to work in their favour and not against them.

We have specialized in studying how fibroblasts contribute to the progression of lung cancer, and we believe this may be a winning formula that complements other long-standing efforts to target cancer cells. The idea is to address cancer not only by targeting the cancer cell itself, but also all the specific support it receives from the surrounding tissue. This is a multi-pronged attack that we hope will be more effective and will enhance therapies that are currently being used with limited success.

How important is the collaboration between universities and companies?

It is very important on different levels. On the one hand, I see it as a kind of mutual help. We have the scientific resources and the capacity to generate new knowledge, which in our case allows us to better understand how a drug works, and therefore to improve its applicability. On the other hand, it is clear that in exchange for this knowledge the company provides us with economic resources that allow us to hire researchers, which at times like this, with a scarcity of public resources for research, is a very welcome complement. We must also take into account the importance of the social benefits derived from this collaboration. All translational research aims to generate information that can be beneficial to patients. This is our main motivation, to generate information that may be useful in one way or another to improve cancer treatments.

A series of fortunate coincidences led to our collaboration with Boehringer-Ingelheim. They had a drug that they had initially developed against angiogenesis, the formation of blood vessels that help nourish cancer cells. They tested it in a clinical trial with thousands of patients of the two major types of lung cancer—adenocarcinoma and squamous cell carcinoma—and found that it provided therapeutic benefits only against adenocarcinomas, but they did not know why.

We suggested a hypothesis that explained why this drug might work well for one type of lung cancer and not for the other. We have been working with fibroblasts from lung cancer patients for years, and we know that they behave differently in adenocarcinomas and in squamous carcinomas, so it was a bit like connecting the dots and coming to the conclusion that fibroblasts could partly explain the selective response to this drug. The results obtained in the laboratory validated the initial hypothesis, and encouraged us to aim to better understand molecular mechanisms. Over this first year we have been able to identify which cells are responsible for this differential response, and for the next two years we will focus on the main molecular alterations that measure the response to this drug.

How did you receive the award from the AECC?

Receiving this award was a public acknowledgment and also an economic help that allows us to move forward without so much anxiety. To put it mildly, we are now going through a period of budgetary anorexia. We have many ideas and a lot of enthusiasm to carry them out, but we are slowed down by the lack of resources that would allow us to progress at the speed we deem necessary. In this sense, the recognition of the AECC is a commitment to support this innovative approach to try to address not only cancer cells but also the help they get from the surrounding fibroblasts. This aid has come to foster an already very promising path.

Do you think that the cure for cancer will be discovered someday?

I hope so. As things stand, however, I rather think that we will manage to turn cancer into a chronic disease. That is, it may not be fully healed, but we will be able to keep it under control, and that would be a major improvement. In recent years, the therapies based on strengthening the immune system are working well in some patients of lung cancer and melanoma, although we still do not know very well why. We still have a long way to go, but progress is being made on many levels and everything suggests that combining therapies that address the different anomalies of cancer cells and the cells that support them can be a successful way to control or reduce the progression of cancer.

Mina Bissel, the mentor I had during my postdoc in the United States, is a great role model for me. She was a pioneer in looking into what happens outside cancer cells, but for decades her ideas received very little support. Today, however, conferences on cancer have sections exclusively devoted to this topic, thus she has been a great example of how not to give up if you think your idea is good. In addition, my most local model is the oncologist Pere Gascón, former head of oncology at the Clinical Hospital and a pioneer in studying how the nervous system contributes to the progression of cancer.

The best invention or innovation in history?

The techniques to purify drinking water and antibiotics to combat infections have undoubtedly been very important advances that have made it possible to reduce mortality on a global scale. At a more local level, another impressive invention has been the washing machine, because of how much time it saved for a significant part of the population.

The FBG is… a very useful tool for managing the interaction between research groups and companies or foundations. In this sense the FBG does its job very well, and my experience over the years has been very positive.