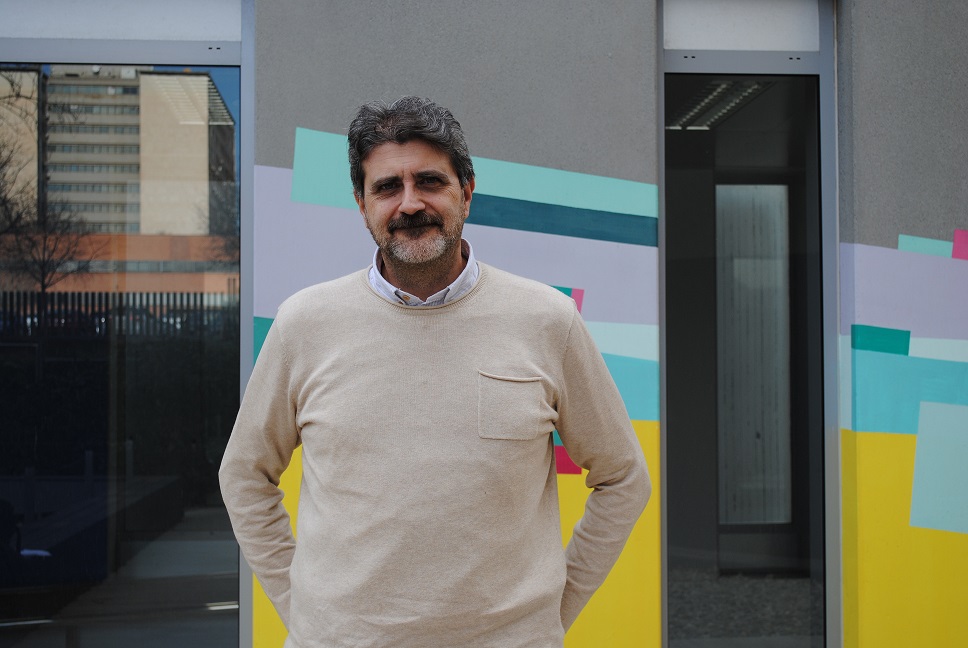 Javier Luque recently received the Antoni Caparrós prize, awarded by the Social Council of the UB and the FBG to the best knowledge transfer project, for his collaboration with the company Pharmacelera. The research group in Computational Biology and Drug Design at the Faculty of Pharmacy and Food Science developed a methodology for the creation of new molecular descriptors that facilitate the discovery of new drugs.

What did it mean to receive the Antoni Caparrós prize?

It was very rewarding, because in a way this award is a recognition of the group’s trajectory. We have always had the vocation of collaborating with industries and private companies to try to transfer the knowledge we develop within the group, and for this reason I think that the award is a commendation for the whole team. To be able to see that part of our efforts translate into tools that can be useful, in this case, for the design and development of drugs, is very fulfilling.

What is the research group currently working on?

Our goal is basically to understand how living beings function at the molecular level. This means, above all, addressing the issue of recognition between molecules (how molecules interact with a protein, the interaction between proteins, and how this interaction leads to a certain biological response). Once we understand these mechanisms, which we manage to do thanks to a wide range of computational methods, we take advantage of this to design new bioactive molecules, ideally with the aim of obtaining a drug prototype candidate. The idea is that if we know what molecular mechanism underlies the action of some small molecule, then we can develop a rational, well-directed design to introduce certain chemical groups in certain positions in order to increase or modulate this biological response as we see fit. Instead of conducting a blind search, which would involve screening hundreds of thousands of compounds, we can produce a much more targeted design to obtain this final compound that should, in principle, save economic resources.

What diseases is this search for drug candidates aimed at?

As part of our research at the University of Barcelona, we are working on two main areas of application: Alzheimer’s disease, in collaboration with Professor Diego Muñoz-Torrero, and infectious diseases, especially tuberculosis and the flu virus, mostly with Professor Santiago Vázquez, both of whom are members of the Faculty of Pharmacy and Food Science. In the latter case, we are interested in identifying molecular mechanisms or processes that may be important for the pathogen’s activity or survival in order to interfere with this process through a drug. In terms of methodology, what we want is to end up with new tools to accelerate or increase the success rate in identifying new compounds that are capable of producing such bioactivity.

How can society benefit from this?

Designing a drug is a multidisciplinary task with many different sides contributing to the ultimate success, which would be a drug that reverses the effects of a disease. Within this multidisciplinary field, we focus on the part that properly affects the design of this molecule, the drug. Using the tools we design, we can reduce in a sensible and significant way the economic expenses linked to the research that must be carried out to identify these compounds. In this way, on the one hand, we obtain a return on society’s investment in the academic training of professionals, but on the other hand, we also contribute to reducing time and costs in drug development. This results in greater therapeutic efficacy and selectivity against a given target, while at the same time avoiding the adverse effects of a drug.

How do you collaborate with companies in the sector?

One of our most recent collaborations is with Pharmacelera, a company led by Enric Gibert and Enric Herrero. Our aim there is to develop tools that provide new resources for the identification of bioactive compounds based on the research we have been carrying out.

Using this methodology and implementing it in a specific context to turn it into a useful tool available to everyone entails a kind of technological work that we cannot perform due to a lack of resources. In contrast, Pharmacelera already has this technological know-how. What we do is transfer this knowledge, and then they implement it into efficient computer tools. So far we have two, PharmScreen and PharmQSAR, which are already available to the scientific community. The idea is to continue working in this direction to develop new tools. In fact, we hope to have two more by next year. From what we have seen, the application of these tools yields very good results in the sense that, by making a relatively small selection of molecules, several compounds have emerged that were active and could act as hits. Further monitoring, however, is usually left to the company with which we collaborate.

I believe that the transfer of knowledge is fundamental, and that it must be a very well-defined aspect of university life. Training future professionals is already part of the university’s return to society, but being able to take some of the ideas that this research has generated and implement them so that they can produce beneficial results, in our case for the pharmaceutical field, for society and private companies, among others, is an activity that, in my opinion, should be promoted as much as possible.

What I would like is to be able to end up obtaining a compound for the treatment of diseases related to neurodegenerative processes, because they are multifactorial pathologies that have a very strong influence on today’s society.

I think that understanding the molecular mechanisms that regulate the structure of the genome will be very enlightening. It will totally change our conception of gene expression and cellular functioning, and will open up new perspectives for therapeutic intervention.

What is the future invention that scares you the most?

Rather than being afraid of some discovery, what I am most afraid of is how we apply them, such as, for example, the possible applications of the manipulation of genetic material.

… a necessary instrument for our university, especially in order to open a door and make the industrial world much more accessible to us. Without the FBG there was a lot of rigidity in the processes involved in R & D transfer, and in this sense it is a very important element. Some of the projects in which we have participated stem from the Foundation’s dissemination action, and that’s a role that should be enhanced.