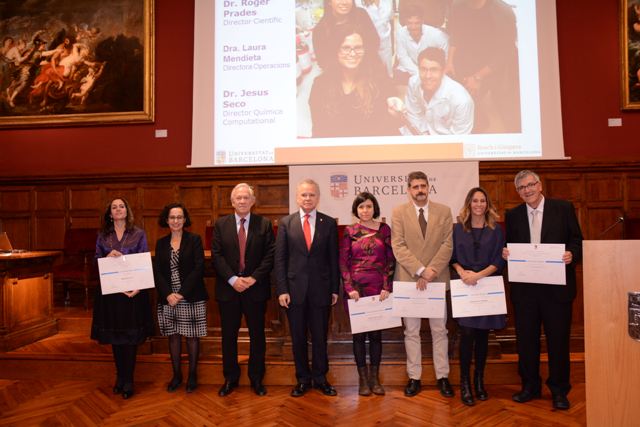 Yersterday the Aula Magna of the Historical Building of the UB held the ceremony for the Awards of the Board of Trustees and Bosch i Gimpera Foundation. In this ceremony, chaired by the rector of the University of Barcelona, Joan Elias, Professor Guillem Anglada Escudé, doctor in Physics by the University of Barcelona and lecturer of Astrophysics at the Queen Mary University of London, gave a conference. The journal Nature listed Anglada among the top ten most important scientists in 2016 for having led the team that discovered the nearest habitable planet.

The Antoni Caparrós Prize to the top project on knowledge transfer was awarded to the collaboration between UB researchers, led by the professor from the Faculty of Pharmacy and Food Sciences F. Javier Luque, and the company Pharmacelera. In particular, the research group Computational Biology and Drug Design of the UB have worked on a methodology to create new molecular describers (that is, quantitative representations of the molecule features that allow a computational analysis and treatment). Pharmacelera, with these new molecular describers, created several tools, such as PharmQSAR and PharmScreen, softwared that ease the discovery of new drugs and which are already used by several pharmaceutical and biotechnological companies. These are new computer tools that ease the design of new drugs for the treatment of diseases such as cancer.

The Antoni Caparrós Prize was also given to RiuNet, a phone app on citizen science developed by the research group Freshwater Ecology and Management (FEM) of the UB. This interactive tool allows people knowing more about the water ecosystems and at the same time, evaluating their ecological quality and hydrological state in a simple, fun and rigorous way. Thanks to some indicators, such as the presence of a gallery forest, or lack of water flow, whether there is waste or not, or the bodies that live in the ecosystem, aspects such as hydro-morphological, biological and hydrological quality of rivers can be evaluated. These are key factors for the management of the ecosystems. This data is verified by the researchers and later accessible to experts and water managers such as the Catalan Water Agency (ACA) and the Júcar Hydrographic Confederation (CHX), but also any person who is interested in the project. RiuNet, coordinated by Narcís Prat, professor of Ecology at the UB, gets people to get closer to nature and learn about fluvial ecosystems, and it sets a relation between the administration and the citizens, and participation in the environmental decision-taking.

The awardee of the Senén Vilaró Prize to the top innovative company was Iproteos, a biotechnological spinoff of the University of Barcelona and the Institute of Biomedical Research (IRB Barcelona) that focus its activity on research and drug development for the treatment of uncovered medical needs. IPROTech technology represents the scientific core on which the spinoff carries its activity out. This technology allows researchers design future drugs based on peptides, called peptidometics, and enables researchers to speed up their research and get new molecules which can become future drugs. In 2016, biotechnology raised € 1,5 million in private capital. With this money, Iproteos reached the € 3 million in external capital with public and private.