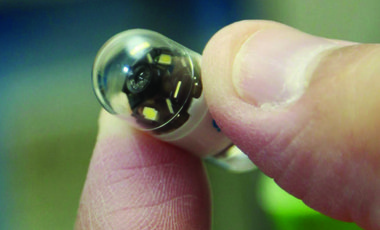 Department of Mathematics and Computer Science at the UB – Computer Vision Center at the UAB – Hospital of Vall d’Hebron – Given Imaging, Ltd.

The computer vision analysis of capsule endoscopy videos has proven to be convenient for patients and medically useful in multiple clinical studies conducted to date. The project is sponsored and performed in cooperation with Given Imaging, Ltd.

Intestinal motility disorders – contractions-, which usually manifest as changes in the rhythm and impaired coordination of the movements of the intestinal tract, affect up to 30% of the population, causing a serious detriment to their quality of life.

The development of Wireless Video Capsule Endoscopy has represented a new opportunity for the diagnosis of this type of pathologies. This technology consists of a miniaturized camera, a lighting system, and a wireless transmitter enclosed in a container the size of a medicament capsule (11x26mm). Hence, the patient can swallow the capsule, which, while traveling along the gastrointestinal tract propelled by peristaltic movements, transmits images of the inside via a radio signal received by an external device.

The travel lasts around 8 hours, during which the camera sends about 30.000 images of the intestine that will be examined by the specialist.

Despite the fact that wireless camera endoscopy has been used for the diagnosis of several intestinal pathologies, its application to motility disorders has been almost negligible so far due to both a lack of criteria for visual diagnosis and the great amount of data produced, which makes its manual analysis unviable.

The Department of Mathematics and Computer Science at the University of Barcelona, in collaboration with the Computer Vision Center at the Universitat Autònoma de Barcelona and specialists in gastroenterology from the University Hospital of Vall d’Hebron, has developed a diagnosis system for intestinal motility dysfunctions based on the images provided by a wireless endoscopic camera that describes a range of visual patterns, both static and dynamic, from which it is possible to render an objective diagnosis.

From a medical point of view, the research has been focused on the discovery of new symptomatic factors of the disorder derived from the visual analysis of the images. Regarding the technological perspective, the innovation rests on the development of an automatic recognition system that allows the immediate extraction of diagnostic visual patterns out of a large set of images, and the generation of an automatic decision-making system to assist doctors with their diagnosis.

This development definitely opens the door to the substitution of a procedure that is unpleasant for the patient by a more amiable one with a better ability to diagnose.