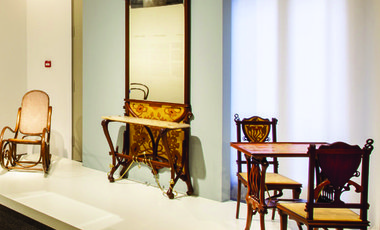 Catalan Modernism was much more than an aesthetic trend, it was an ideological movement that demonstrated a serious commitment to change. The new forms and ideas became firmly established in Barcelona in the late nineteenth century, and the building of the Eixample brought about the growth of construction and its subsidiary industries, which left one of the most important cultural heritages of Catalonia.

The Research Group on Art History and Contemporary Design (GRACMON) of the University of Barcelona (UB) showed the influence of this trend in the formation of design in Catalonia to the public with the exhibition “Catalan modernism: Art, workshops, industries,” curated by Dr. Mireia Freixa, director of GRACMON.

The exhibition -which was displayed at La Pedrera from early October 2015 until the end of January 2016-offered a vision of Catalan Modernism focused on applied and decorative arts, as well as on the crafts that played a greater role in the city. Thanks to the collaboration of the owners of the pieces, individuals, and small and large museums, the GRACMON of the UB demonstrated, along with La Pedrera, that artistic movements can also be spread through everyday objects.