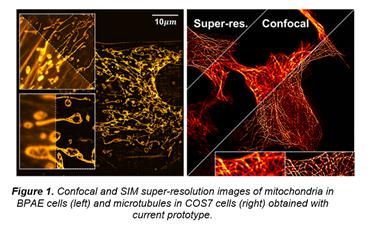 Industrial partners are sought to further develop the technology through a license agreement.

Patent Application with priority date July 2018, currently at national phases in EU, US, JP and CN.

A programmable laser illuminator based on acousto-optic technology has been developed for applications in fluorescence microscopy. The laser device can dynamically project onto a microscopic sample arbitrary light patterns with accurate positioning, avoiding the drawbacks associated to conventional laser illuminators such as those based on lens arrays, galvo- or micro-mirror devices (inflexibility, optical inefficiency, slow operation). Industrial partners are sought to license the technology.

Laser fluorescence microscopy is the reference technique for sample visualization in cellular biology and biomedical research. In general, in this type of microscopy, a sample modified with fluorescent labels is illuminated by an excitation laser and the emitted light from the sample is filtered and used to compose a viewable image. Several microscopies result depending on how all these steps are carried out (illumination, scanning, filtering and image composition), including single-point confocal microscopy, high-speed, spinning-disk live-cell imaging and super-resolution techniques (structured illumination, STED). With the technology developed at the University of Barcelona, many of these microscopy techniques can be implemented in a single instrument that also has photostimulation capabilities.

Researchers from the University of Barcelona have developed a laser device that can dynamically project onto a microscopic sample arbitrary light patterns in parallel with accurate positioning, replacing the conventional illumination of a laser microscope. The programmable illuminator is based on acousto-optic deflector (AOD) technology incorporating principles of digital holography that enable gaining an unprecedented control over the light traversing the device. This principle is used to generalize the illumination of a laser microscope, for example projecting spot arrays similar to those produced by perforated Nipkow disks in spinning disk microscopes. However, as opposed to these instruments, the illumination patterns are totally programmable, as these are not based on fixed apertures etched on a solid substrate in mechanical motion.

Together with high-speed algorithms to process the image, the system is able not only to reproduce the functionality of several types of laser microscopes but also tune its main characteristics (speed, resolution, optical sectioning ability or phototoxicity) at will.

A working prototype at the TRL6-7 has been developed, producing excellent microscopic images (see Figure 1).