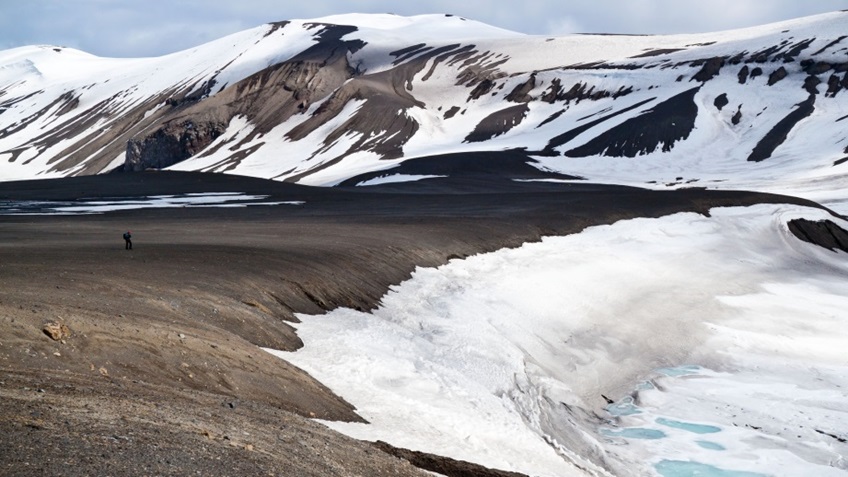 The group is looking for a license agreement, but other collaborations may be considered.

We present a marine biopolymer (MBP) from a novel Antarctic bacterium (strain ID1). Its new structure and properties makes it a potential new cosmetic active ingredient which provides both elasticity and strong dermo-protection to human skin.

Since 1995 our group has been focused on the isolation of new Antarctic microorganisms that produce biopolymers. The current project is based on the discovery of a new biopolymer produced by a novel Antarctic bacterium (ID1) isolated from marine sediment from South Shetland Islands.

South Shetland Islands are a group of Antarctic islands showing a surprising variety of microclimates including extreme ranges of temperatures, strong winds, high salinity, and scarce nutrients. These extreme environments have forced all life, including microorganisms, to acclimatise by developing protective mechanisms to survive, one of which being the production of biopolymers.
Biopolymers serve many functions for microorganisms such as protection against dryness, extreme temperatures, high salinity and toxic compounds. At the same time, biopolymers promote adhesion and are a reserve of nutrients. We have demonstrated that the new MBP accomplish most of these functions and therefore it could be applied to protect human skin from the impact of aggressive conditions. Harsh conditions for our skin could be those that occur in our own urban habitat like pollution, or those that arise from activities such as intense sport, sudden temperature changes or loss of nutrients and elasticity due to aging.

Efficacy tests were made on volunteers from 24 to 64 years old. In only 9 days, volunteers treated with a cream containing 0.2% of MBP showed a significant increase (*) in skin elasticity compared with those treated with the same cream without MBP (net-elasticity measured with a Cutometer®) (Fig. 1).

Volunteers treated with a cream containing 1% of MBP during 9 days showed a significantly lower increase of the Transepidermal water loss after application of an irritant agent (TEWL, measured with a Tewameter®, Fig.2). This demonstrates that the MBP is a dermo-protective agent that strengthens the skin against external aggressions. 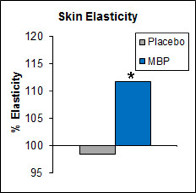 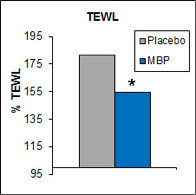 2. HRIPT. Human Repeated Insult Patch Test. Result: very good skin compatibility and does not induce any allergenic reaction. Therefore, is possible to claim it is a hypoallergenic product.

6. Strain ID1 has not been genetically modified

MBP forms long-term stable emulsions at lower concentrations than other commercial emulsifiers. Together with its efficacy, this property could help in cosmetic formulations (Fig.3). 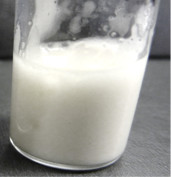 MBP has a cryoprotectant function against the loss of viability due to freezing. Survival rates of strain ID1 protected by the MBP after freezing cells at -80 ºC, expressed as the percentage of viable cells with respect to unfrozen cells, was 93 % while for cells without MBP was only 49%. 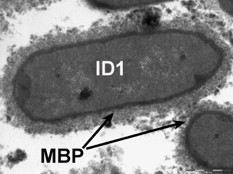 MPB has an osmoprotectant function against high concentrations of salts. Survival rates of strain ID1 after being in an hypertonic solution of NaCl 15% for 2 h, expressed as the percentage of viable cells with respect to untreated cells, was 51,8 % while for cells without MBP was only 4,7 %.
Other properties remain to be explored.

MBP production has been optimized to move to pilot plan fermentation. Initial cost estimation could be provided. We have filed a patent with Priority date: 10/02/2014.